Semitec’s NC (Non-Contact) Sensor is a new concept in measuring infrared heat, originally designed for use in office automation products such as laser-printers and photocopiers.  Traditional non-contact sensors use thermopiles which can readily lose their efficiency due to the accumulation of carbon powder, the NC Sensor however can still operate despite this dust build-up.

Utilising Semitec’s unique miniature FT thermistor technology, the NC Sensor is fitted with two NTC elements, one for IR measurement and the other for temperature compensation.  One detects the IR radiation emitted from the object to be controlled and the other measures the local ambient.  By comparing the temperature differential between the two thermistors, the target temperature can then be calculated and controlled.

Semitec have developed a non-contact sensor which can be easily installed, is self-compensating and withstands more aggressive environments than conventional infra-red sensors. 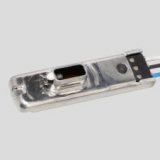